The recently released version of PreCode now includes support for the new SyntaxHighlighter v2.0 markup and options. The HTML that SyntaxHighlighter uses to identify code snippets was changed in v2.0 to be more standards compliant and is notably different to the old markup. For this reason, the plugin will not work with older versions of SyntaxHighlighter.

The UI of PreCode has also been given an update and is looking very nice indeed. 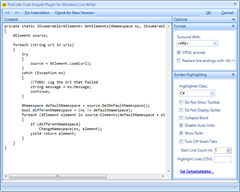 Another cool feature Anthony Bouch has added is the ability to run PreCode as a standalone Windows desktop application. Thanks to Anthony for keeping this great plugin alive and kicking.